skip to main | skip to sidebar

Right after I finished the race today, I had a bit of a revelation. While I don't recommend it, I did this race with little running training and a not so good running base (I was running some outside of camp and still doing camps). I had some fear this morning prior to the race about my ability, but finishing the race triggered a bigger feeling in me. While I'm embarrassed to say this, I am truly amazed and proud of my fitness level and where I am today. I'm ending the year happy and healthy, which makes me smile. Wishing everyone a happy and healthy 2012!

I talked about Wellness Goals early in 2011, but then I didn't actually draft them until sometime in March. Procrastination, I'm good at it, don't be jealous. So, this post is already a win for me! ::cabbage patch::

I'm looking for some year-end entertainment and excitement which will be at your expense. Well, really no expense to you, it will be expense to me, but it will hopefully provide the winner with a little fitness motivation.


So what is it? A copy of Jil1ian Michae1s' 3O Day Shred. All you have to do is leave a comment and state for everyone to see that if you win it you will take on the challenge! I'll let people comment here or on my upcoming 2011 Wellness Goal post and pick a winner on the 2nd.

Disclaimer: While Ji11ian is my bff in my head. She sadly does not know me and did not provide me with the prize. It will come from the "fluffy's husband is outta town and I was told to do something fun" fund (I think this counts).

This time of year always makes me think about the year before. Last year our house was all decked out and we had a big holiday party. This year the holidays didn't turn out as we hoped and my husband left early in December to go overseas and won't return until mid-January. Our separation and limited contact has definitely put a damper on my holiday spirit, but compared to so many others we are extremely fortunate. So not to sound trite, I have been focusing on my blessings.

One thing I have noticed year after year on this journey is that I no longer look back on the prior year with regret. 7ish years ago that was not the case. I'd find myself wishing:
While the band is a tool that helped me get to where I am today, it is by no means the sole reason for my success. When I made the decision to get banded, I was at a crossroads. I was done. My life had to change and it was the first step of many in making permanent changes. The band was definitely a catalyst, but eating well most of the time and exercising are also required. I think that's the key to my success. Amy wrote a really good post that I totally agree with. Go check it out here.

I am currently drafting my wellness goals ƒor 2012 and will close 2011's wellness goals around the new year. I am finishing the year strong and am excited about it!

So, I challenge anyone that happens to read this post: What will you find yourself thinking at this time next year? What will you do to ensure your success in 2012?

Thanks for reading and Happy Holidays! 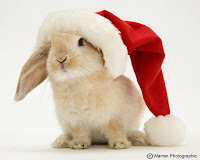 Weight: Why One Size Doesn't Fit All

The author of the article and her mindset on where she is does a great job of describing where I am trying to be in my personal journey at this point, but I think there are nuggets in there for anyone! I loved this:


Just remember that weight is subjective. One person's idea of overweight is another's person's idea of just right. You decide what is good for you. I've always been happy with my body and never wanted to weigh a number that I have to constantly struggle to maintain. Life is for enjoying. I'm happy with me. No one should set rules for how I should feel.

This is exactly where I am striving to be: "Life is for enjoying. I'm happy with me."

During the summer (that never seemed to end!), I can remember thinking at camp (1) it was hot; (2) I'll be glad when it is cold (I prefer cold over the brutal heat & humidity personally) and (3) the whinefest would shortly switch gears from hot to cold. Thursday: 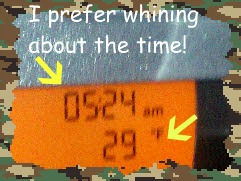 And, yes, it's started! It was mild whining early in the week, but it increased as the week progressed. It got a bit on my nerves *sigh*, but I think the holiday season is contributing to that. It's early in the morning and dark, I'd rather be snuggled in my bed and warm too. We all know it's cold and I don't think there is one of us that is really *glad* to be there. (Just glad when we're done!) So, put a sock in it! 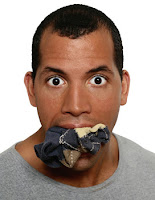 In other news, I recently had a birthday...and need to update my sidebar to 43!!!! Not that I know what 43 is *supposed* to feel like, but I just don't feel 43. I got a few new clothes and had mentioned to my husband that I wanted a ceramic watch, and tada: 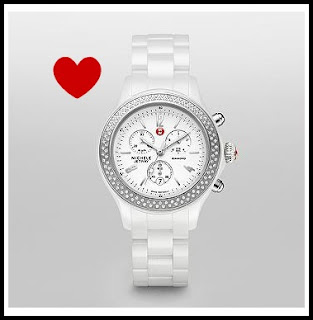 Instead of cake on my birthday, I decided I wanted an ENTIRE bag of D0ve milk chocolate squares. I divided them into 7 bags and ate a bag for 7 days straight.

I'm guessing there's someone that might be thinking something along the line of that's a lot of calories, she's gaining weight, that's maintenance? an entire bag? etc. While the chocolate isn't necessarily quality calories, it was less than an extra 200 calories per day. Hell, the slice of carrot cake I like from ch33secake factory has more calories than the entire bag of chocolates anyway! So, as an isolated week it may seem like a lot--or potentially a slippery slope, but in the big picture it's not. And, I also don't plan to make it a regular occurrence!....until my next birthday! : )
Posted by Fluffy at 3:34 PM 6 comments:

In discussing the NYE/NY double with a friend a few weeks ago, I mentioned that I was going to stretch myself and do the half vs. the relay. Which led to this conversation on Thursday:

Friend: Hey, you've been training for the half at the end of the year, right?

Fluffy: *Snort* "Training" is probably a big stretch of the word for what I have been doing, but I have set my race goals accordingly...low and slow.

Friend: Well, we just had someone drop out of our relay team. Can you fill in and do the 6.5 leg?

Fluffy: Uh, you mean as in this Sunday?

Fluffy:  If you can live with me wrecking the team's time, then sure.

Fluffy: OK, but you need to let them know that I'm a turtle.

Friend: *laughing* Ya whatever.

We decided to take the transit down to the race site to avoid the traffic. We got down there, used the portas and then I went to my bus to get to my leg. I got on the bus and since I can get lost pretty much anywhere, I got on and asked if it was for my mile distance. Some people looked at me like I'm an idiot, but oh well. I wanted to be sure. Then off we went to the transition point.

Everyone started getting off the bus. I said to the dude next to me, you getting off? He says to me, aren't you? I said, ya, when they kick me off! It's cold and wet. Where they going anyway? It wasn't an issue and we stayed nice and warm...and most importantly dry! The temp was somewhere in the very low 40's, but it was raining big time!

The two gals before me are fast. So, I did some calculations and knew I needed to get my butt outside at a certain point. I went out and my teeth seriously were chattering. I couldn't get them to stop. This guy next to me said that I could sit on the bus and I said believe me I would but my team will be here soon. He looked at me like I was crazy and he said is your team that fast? I said yep and no sooner had I said it that I said oh there she is now. His face was priceless!

I got the ankle thingy on and took off for my 6.5 mile leg. To give you an idea of just how fast the previous two girls were I was constantly being passed (I'm a turtle and proud of it!). Eventually the 3:05 marathon pace group passed me to give you an idea!

I just kept going. My pace was much faster than I planned, but I felt good and honestly energized by all these speedies around me. I just kept repeating in my head a story my husband told me about a Navy Sea1 (NS). When asked about the training and the speed you have to run, the NS was asked what if you can't run that fast, the response was "you just run faster". Well what if you can't, "you just do". Then when the NS was asked about distance, the response was "you just keep running". So, that's exactly what I did. I just kept running.

The 6.5 mile leg turned out to be SEVEN! But I felt good and still had plenty of gas in the tank! I was seriously proud of myself since my base is far from what it was. It was also a great confidence builder for half at the end of the month. I'd love to post a bunch of pics, but I don't have any! I wanted to be sure I had battery charge the entire time and the camera sucks it up, but I can share a pic of the medal. 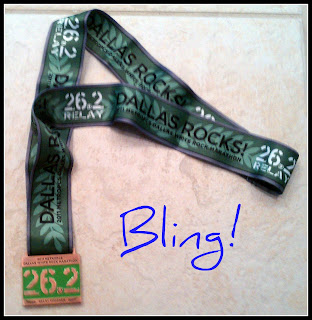 Our team did great. We were shocked to find out that we placed 18th! Cracks me up even now and my buddy pointed out that I held onto 4th place throughout my leg. I wasn't a turtle, but a rurtle! 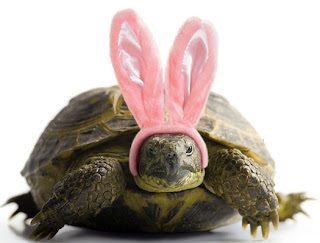 I liked this race, but I don't think I'd do the relay again. There was too much waiting before and after my leg. I'd rather just do the half next time (get there, do it, and done). Uh, did I just say that?!?

Tips for Success with Lap Band